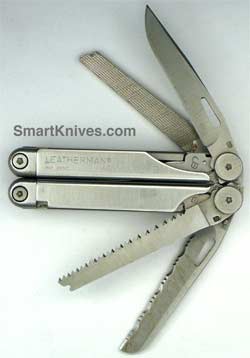 The original Leatherman Wave tool was an extremely popular full-size multitool. It included pliers, wire cutters and a generous set of blades and tools, all housed in a tough stainless steel body. The original Wave was introduced in 1998, and replaced by the current Wave in 2004. The original version was lighter and more nimble, and it remains very popular.

Version History: All Wave tools are dated inside both handles. The two dates are often slightly different.

In mid-2001, Leatherman added four bumps on the rear of the serrated blade, to make it a bit easier to see or feel which blade is serrated. Later in 2001, the Leatherman USA marking on the pliers pivot was replaced with Leatherman Tool. In 2003, the Wave dates usually have an A or B suffix. We have not yet discovered why.

The first and final years of production are less common, and more collectible. Because of the variations, Waves from the split year are also a bit unusual, which makes them somewhat collectible. That makes 1999 and 2000 the best choices if you just want a practical Wave Original.

Most of our Waves are in used condition, from airport confiscations. New ones are uncommon, and much more expensive.