Until 1996, there were no Leatherman tools with scissors. In that year there were two new be-scissored models: the keychain-sized Micra, and the full-size PST II. A few years later the Wave was released, with scissors similar to those on the PST II. Both have the scissors nestled inside the handle, using a clever fold-out design.

The same configuration is used on many current models, with a few minor refinements over the years. 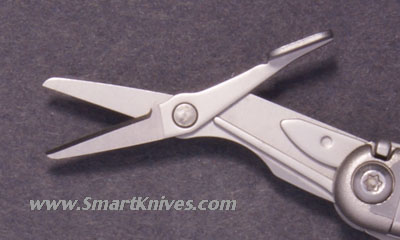 The Leatherman folding scissors are made from tough 420HC stainless steel, which cuts well and lasts a long time if not abused. To use these scissors, pull the tool out of the recess, and fold it into place. When you are finished, fold it back into its slot.