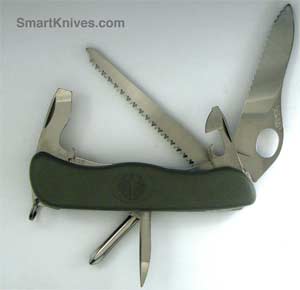 The Victorinox Trekker German Army Swiss Army knife is a large, 111mm / 4 1/4" Swiss Army knife. The large, one-hand opening blade locks open, and is released by pushing a liner lock that is positioned parallel to the blade. This model is standard issue for soldiers in the German Army. It has the same tools as the One-Hand Trekker, but with dual density scales.