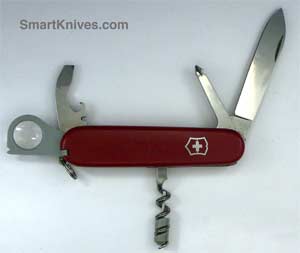 The Victorinox Scientist Swiss Army knife is a legendary 91mm / 3 1/2" Swiss Army knife, with a pocket magnifier and a minimalistic set of other tools. This is the smallest Victorinox knife with a magnifier. It is an extremely popular collectible. It also is a useful every day carry for anyone who wants a magnifier in a very compact package.