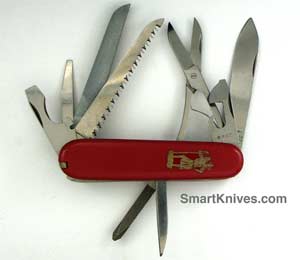 The Victorinox Luxury Automobile Swiss Army knife is a retired, standard sized 91mm / 3 1/2" Swiss Army knife, with an unusual straight screwdriver in place of the small blade. This model often has an inlaid metal image of Saint Christopher (the patron saint of travelers), rather than the usual Swiss cross insignia. It was sometimes called the Cadillac or Luxury Motorist, and often was sold by model number rather than a name.