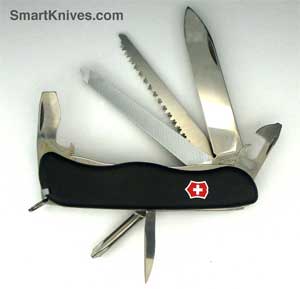 The Victorinox Locksmith Swiss Army knife is a large, 111mm / 4 1/4" Swiss Army knife. The large blade locks open, and is released by pushing a liner lock that is positioned parallel to the blade. This is the largest Victorinox knife with a metal saw but no scissors. It was retired circa 2008.